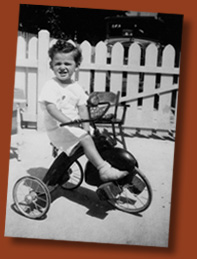 As a kid, I was always involved in making things, usually from found objects or from pieces of broken toys. Growing up with plastic army men, I was interested in creating environments in which my army men could move about safely. My father was a butcher in a small market, and my Mom was always at home, busy taking care of my brother and me. At an early age, I discovered that art was a field of interest that engaged me fully.

I experimented with sports in high school, trying to win the hearts of beautiful girls, but was never too successful. At this time, I discovered cars and how girls loved cars. I was asked to paint and stripe all of the cool cars at school. Both the hoods and jocks protected me from evil, and appreciated what I could do for them.

After graduating from high school, I became involved in ceramics, and then sculpture, while at San Jose State University in California. I went on to the University of California at Berkeley and received an MFA in art.

In 1971, I won the Rome Prize Fellowship in Sculpture and went to Rome, Italy for two years to work. After Rome, I taught a year at the Rhode Island School of Design, and then moved back to California to teach at the University of California at Santa Cruz. After moving to Virginia, I taught at the Corcoran Museum School in Washington DC. I have been invited to lead workshops across the US over the last 20 years, including at the Art Institute of Chicago; Boston University; Pilchuk School of Art, WA; the International Sculpture Center, San Antonio, TX; and at International Sculpture Conferences throughout the states, in addition to a seminar at the prestigious Bild-Werk in Bavaria, Germany.

For nearly four decades I have exhibited across the country, and my work is represented in a number of national collections, including those of the Smithsonian American Art Museum, Washington, DC; the Oakland Museum of Art, CA; the Tacoma Museum of Art, WA; and the University of Virginia Art Museum, Charlottesville, VA.